Seabras-1 is a 6-fiber pair, 72Tbps submarine cable system that is the only direct POP to POP system between Sao Paulo, Brazil and New York/New Jersey.

Developed, owned and operated by Seaborn, the system is also the first transoceanic system to directly connect the commercial and financial centers of North America and South America.

Seabras-1 provides a POP to POP solution between metro New York/New Jersey and metro São Paulo, with a wide range of POP locations to choose from. Seabras-1 also provides significantly improved quality of service with its all-underground backhaul and metro fiber from its Praia Grande landing station into metro São Paulo.

Seabras-1 offers a lower latency POP to POP solution than any other current system between Brazil and the USA.

And Seabras-1’s direct POP to POP route between the commercial and financial centers of the US and Brazil also has fewer active elements, which means less downtime. The system is designed with 100Gbps coherent technology on an end-to-end solution.

By bundling backhaul into major POP locations, Seabras-1 provides improved access for onward connectivity to key IP hubs and leading data centers in Brazil and the U.S., including those owned by Equinix, CoreSite and Digital Realty. 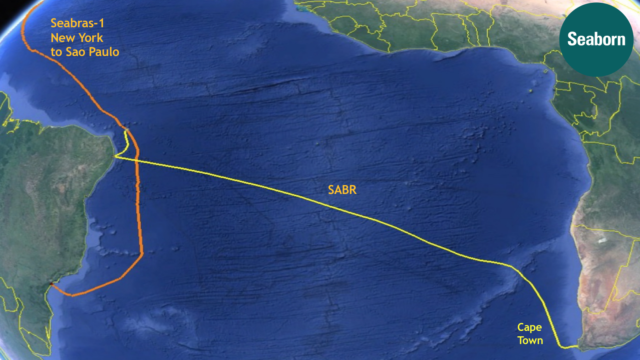